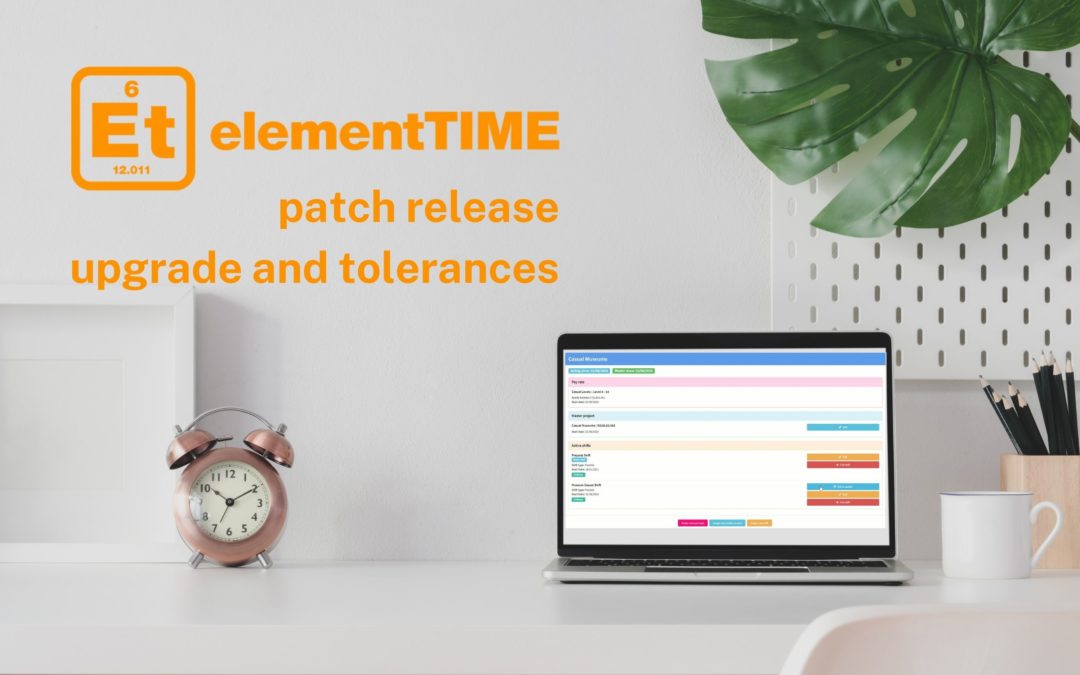 Patch release 1 of version 10.2 of elementTIME includes some quick fixes for version 10.2 and items that didn’t make it out of testing for the main release. But really this is a release for us as it includes framework upgrades and some other stuff to make things awesome under the hood.

The key changes include notifications for changes made on a timesheet post submission by managers or other payroll officers and the ability to manually trigger a rerun of all timesheet calculations. The patch also introduces timesheet tolerances which is a flash term for basically dealing with ERP systems requiring decimal time where the decimal time doesn’t fit neatly with actual time (for example 7.37 is 7 hours 22 minutes and 12 seconds).

Where a user has multiple shifts attached to their role, you can now assign one of their shifts as a master shift. The Master shift is selected by default when the user records time against that role, so the master shift should be the most common shift time is recorded against. Other shifts can still be selected.

Where a user has multiple time types within a shift the status of each time type can now be altered and master time types can be set (this allows you to have the most common time type showing by default).

If any changes are made to a timesheet after it has been submitted by the user, payroll will be alerted prior to them approving the timesheet (rather than needing to check). They are also prompted to recalculate the timesheet in case any of the changes made triggered new rules or calculations to come into play.

Payroll Officers can now force calculations over a timesheet at any time up to final timesheet close including penalty and other calculations normally only triggered at the submission of a timesheet. This button also rechecks all timesheet processes such as leave and excess time. Because sometimes it is nice to check things when you want.

Payroll officers can now set a timesheet tolerance, this caters for payroll systems that record time to the second rather than the minute. Days, where whole minutes are missing, will automatically calculate and adjust without users needing to worry about recording seconds.

Designed for Councils with staff working  7.37 hour days to accrue RDO (or 7 hours 22 mins and 12 seconds), where over the course of a fortnight the missing seconds mean they are short a few minutes for the period.

All frameworks and libraries have been updated – this is standard maintenance and allows us to make sure everything is as awesome as possible.

Timecards now show the expected hours value for users on glide shifts and scheduled hours block has been added to the timecards summary to show min/max hours.

Change: Schedule change – When viewing schedules you can now see the users role name (not just user name and shift).
Bug Fix: Time types – Fix issue where user’s were unable to make active time types assigned to a user inactive. Now you can.
Bug Fix: Time cards – Fixed issue where the master time type was not selected by default if a user had multiple active time types – now it is.
Bug Fix: Schedule – Fixed issue where for some user’s on daily glide shifts if expected hours were turned off on an individual users schedule the expected hours were still getting used.
Change: Forgot password – the encryption process for generating hash for the password link has been updated and the URL In the forgot password reset link has been updated to be inside a different text alias rather than the full URL.
Bug Fix: User tables – Fixed issue where some users with multiple relationships to rules through the same table had multiple avatars showing.
Change: Reports – Additional column has been added to Authority entry reports to show if time is against a master project or not.
Bug Fix: Timesheets – Fixed issue where 500 errors were returned to users when a public holiday was before the start of the current role and there are no past roles.
Change: Dashboards – User pay information is hidden by default on user dashboards so it has to be selected to show. Useful for when managers are showing other staff how things work but don’t want to share how much others get paid.