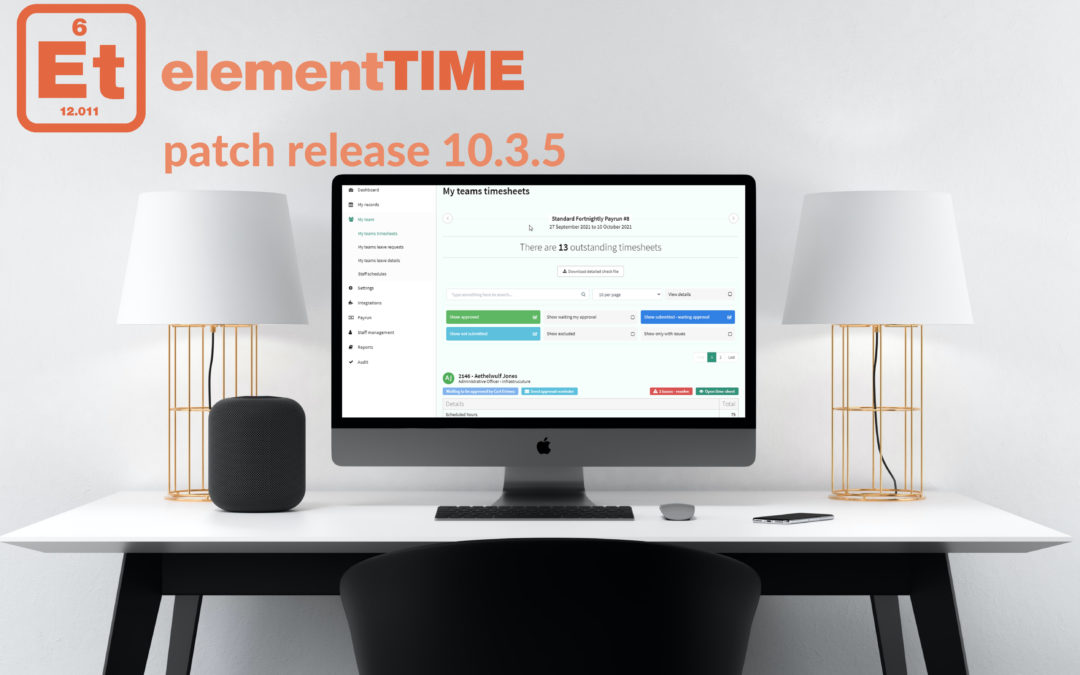 This patch release to version 10.3 has new filters for sorting My Teams timesheets, new leave approval process when approving leave as part of timesheet final approval, the ability to edit role, time types and projects against already recorded time blocks. Plus a bunch of other things to keep the improvements coming while we work on the next big release. Cause even small things can be awesome.

New process for approving outstanding leave requests from the timesheet approval page
New timesheet filters including Waiting for my approval
Ability to edit roles, projects and time types against existing time blocks
Access to my teams timesheets and or leave for non-managers with workflow responsibilities
Search by role on user management table
Hidden inactive projects
All the small (but still great things)

New timesheet filters, including Waiting for my approval

A bunch of new filters have been added to the My Timesheets > My Teams Timesheet including the ability to filter on just what is waiting for My Approval for councils with complex approval workflows.

Note: Some filters such as “Show waiting my approval” and “Show submitted – waiting approval” are exclusive, if one of them is ON, the other is OFF. 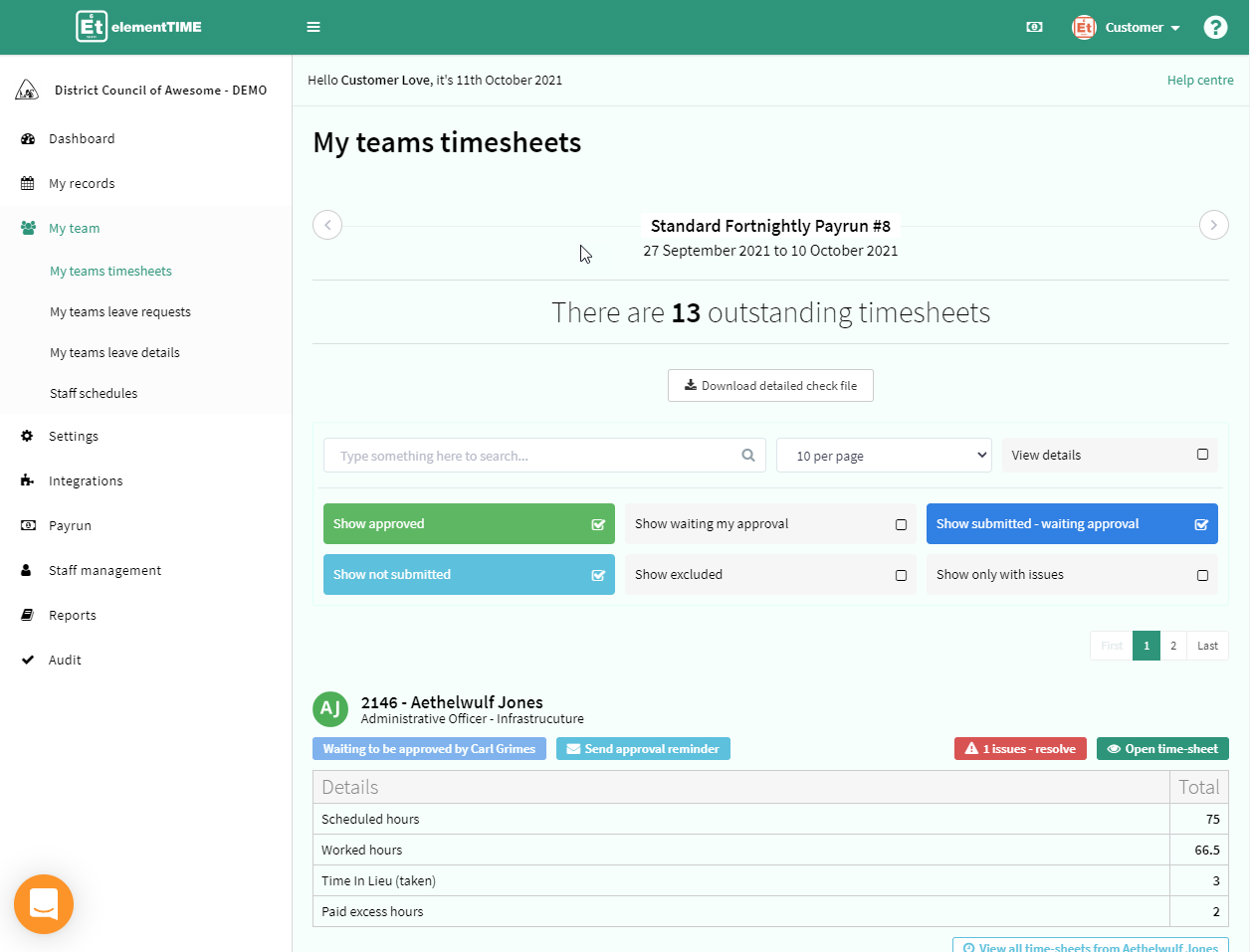 Users were able to edit start/end times and duration against time entries already recorded but now they are able to also change and select alternative time-types, projects, work-orders and even assign the time to alternative roles. YAY right. We know.

This improves the visibility of workflow items for non-managers.

Search by role on the staff management table

Yes, you could search by numbers and names on staff management but now you can also search by role. Looking for customer service officers but forget their name – you got it – Nice right. 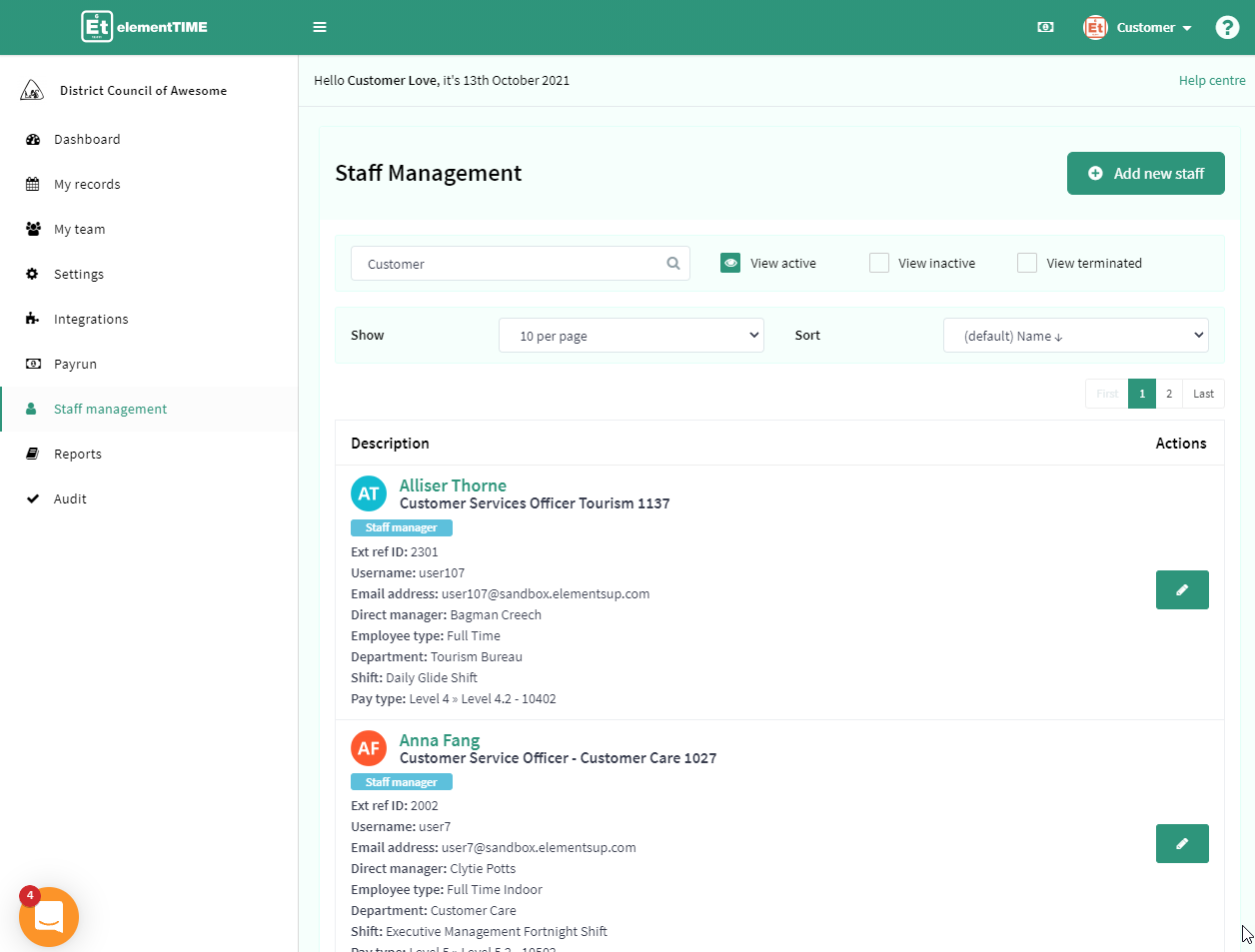 Projects and work-orders that are inactive have always been hidden from timesheets but now they are hidden from selection when assigning to users as well. Because well they should be right – i don’t think we need to explain more than that.

Just because they don’t get their own write up doesn’t mean they are not awesome so make sure you check them out – the small things:

FIX: Fixed issue if a user was using the web tenant on a mobile device and viewing a leave request the button actions were swapped when cancelling leave.
FIX: Fixed Issue when if a user was making multiple actions on a leave request without closing the leave modal between actions the subsequent actions would not work.
CHANGE: Allow file attachments with uppercase file extensions – if file extensions were upper case due to operating system then they could not be attached to leave requests without modifying – now they can.
FIX: Fixed issue with forecasting future available balances on leave types where pro-rata balance can also be used. It wasn’t including the pro-rata and now it does.

NEW:  Selecting the user name on the My Teams > Staff Schedules will open the user’s timesheets setting page
FIX: View selection: Selection of view X number of records is now remembered even when navigating to new pages on My teams > My team’s timesheets table and others. So if a selection other than the default 10 is selected then it will become the default.
FIX: Fix error with the old time-sheets list that had filter bugging the new filters.

FIX: Fix error on recording time using the API was not fixing all the issues and allowing for submission before recalculation button was pressed on elementTIME web app by a payroll officer.
FIX: Fix issue when checking issues for approving time-sheets when related “UserShiftDay” record is null it was not skipping the checks for that record.